Trains get a lift with Eaton 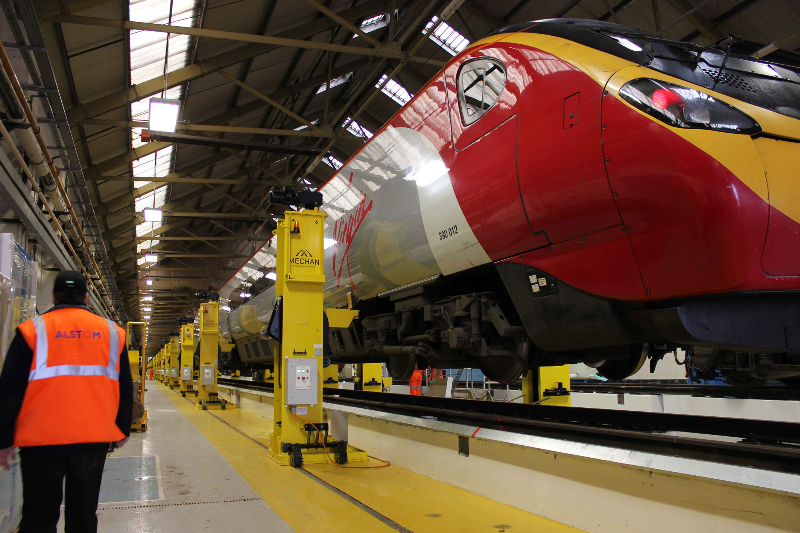 Power management company Eaton has been selected by Jenkinson Electrical Engineering, a specialist panel builder and system integrator, to supply automation products that form the basis of a new and versatile train lifting system developed by Mechan, who work in the design, development and manufacture of mechanical handling equipment for use in rail depots and workshops. The new lifting system allows a virtually unlimited number of lifting jacks to be synchronised with an accuracy of 2 mm or better. This means that even the longest trains can be conveniently and safely lifted so that, for example, bogies can be removed easily for servicing.

In today’s cost-conscious rail industry, it is more essential than ever to maximise the in-service time for rolling stock. As a result, conventional approaches to train lifting, which is part of the routine maintenance of modern rolling stock, have largely been superseded by the use of sophisticated jacking systems. With these systems, four jacks are typically used per vehicle, allowing the whole train to be lifted as a single unit in a matter of minutes.

A key requirement for the success of these jacking systems is that the jacks must be accurately synchronised while they are lifting and lowering the train, so that the risk of distorting the vehicle bodies is eliminated, and the weight of the train, which may be as much as several hundred tonnes, is evenly distributed between the jacks.  Also, to ensure that the system is fully compatible with current and future train types, the individual jacks must be physically separate units so that they can be positioned as required to suit different types of train body.

These were among the essential requirements presented to Jenkinson Electrical Engineering, a company with wide experience of developing specialised automation systems, by Mechan when it was looking for ways to upgrade the control systems used in its products.

The control system that Mechan was already using offered satisfactory performance but it was limited to controlling a maximum of 24 jacks simultaneously. Because it was based on proprietary electronic systems, developing it further to handle more jacks and to add other new features would have been both costly and time consuming.

“We’ve had long experience of working with Eaton products,” said Keith Atkins, general manager of Jenkinson Electrical Engineering, “so we knew we could rely on them to provide performance and value for money. We also knew that by using the XC100 and the XV100 we could produce a versatile control system that could be easily upgraded, should the need arise, simply by making software changes.”

Jenkinson Electrical Engineering selected the XC100 PLCs for the Mechan project as they are compact modular devices that can easily be expanded to meet future requirements, and because they support the CANopen fieldbus system without the need for additional hardware. The XV100 operator interface panels were chosen because of their robust construction, high quality colour screens and their ease of programming.

“The PLC software needed to for this project was quite complex, as we’ve built in a large number of options to cater for different configurations of jacks,” said Keith Atkins, “but Eaton’s XSoft-CoDeSys-2 programming system, which is IEC 61131-1 compliant, made the programs easy to develop and test. The result is a system that’s dependable, and that offers all of the flexibility and versatility that Mechan was looking for.”

Mechan has now used the new train lift control system based on automation products from Eaton on several train lift systems ranging in size from a small single-vehicle lifting system with just four jacks, to a full train lifting system with 44 jacks. In every case, it has performed flawlessly and delivered synchronisation between the jacks that easily meets the 2 mm accuracy requirement. In principle, any number of jacks can be synchronised using the new control system, and the Mechan is planning to use it extensively on future projects.

3D – but without the glasses

Echograph: The gateway for easy visualisation of process and manufacturing data

The Danish pioneer of collaborative robots has created a new, smaller robot for light assembly tasks and automated workbench scenarios