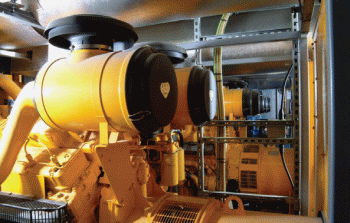 The 21st Century has highlighted a need for clean, efficient and economic energy which has put Combined Heat & Power (CHP) into the limelight. By providing on-site power generation, waste heat recovery and system integration, a CHP is said to offer a realistic, near-term solution for energy ­efficiency and emission reduction. CHP systems are claimed to generate electricity locally while recovering heat to satisfy heating loads in ­buildings. Marcus Dodsworth, technical service division manager of Shenton Group discusses the benefits of CHP systems.

The UK is facing growing electricity demands, volatile fuel costs and power reliability issues, which is necessitating new technologies to provide greater levels of efficiency and expand the use of ‘clean energy’. Concern about climate change and the demand for petroleum products make energy efficiency improvements ever more urgent.

There are several drivers, beside energy efficiency, for the interest in on-site generation. Historically, a barrier to distributed generation (DG) development has been the high investment costs for small units compared with larger central stations. Recently, the cost of small-scale power generating units has fallen, which allows for cost-effective installations in markets with high electricity prices. In addition customers are demanding higher reliability than the grid can deliver.

CHP or co-generation, is the simultaneous production of electricity and heat from a single fuel source. A CHP system recovers the heat lost in electricity generation for use in heating, dehumidification, or cooling. CHP systems are claimed to operate at more than 85 per cent efficiency.

CHP can use a variety of fuels to provide reliable electricity, mechanical power or thermal energy for industrial plants, universities, hospitals or commercial buildings. 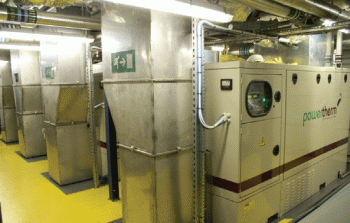 The main benefit of CHP is overall annual energy costs can be reduced.

On site generation reduces the amount of electricity purchased from the grid. Although there will be a shift in gas/electricity balance of a building’s total fossil fuel consumption, any rise in gas costs will be more than offset by the savings in electricity. Many buildings often have sufficient demand for space heating and hot water to utilise a small CHP plant, such as powertherm. Some manufacturers, such as Shenton Group, can synchronise multiple units together to create an efficient on-site power station that can reduce electricity bills.

A whole life cost analysis will help managers determine the full benefits of investing in CHP. This will include comparing the conventional provision of heat and power by boiler and electricity purchased from the local electricity network. Although capital costs of CHP equipment are higher than a conventional boiler plant, the equipment usually has lower Whole Life costs when the annual expenditure on operation, maintenance, heating, ventilation and air conditioning as well as fuel costs become part of the equation. 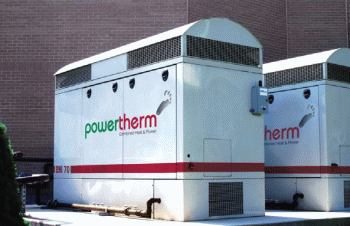 Will CHP work for you?

There are three criteria to consider:

1. Do you want to use the heat, for heating or hot water, most of the year?

2. Do you use a reasonable amount of electricity, as most savings come mainly electricity bill reductions?

3. CHP burns gas to produce cheap electricity, so the ratio in electricity and gas costs is important.

As a yardstick, if your annual electricity costs exceed £200,000 and you need hot water constantly, a CHP system could save you £40,000 a year.