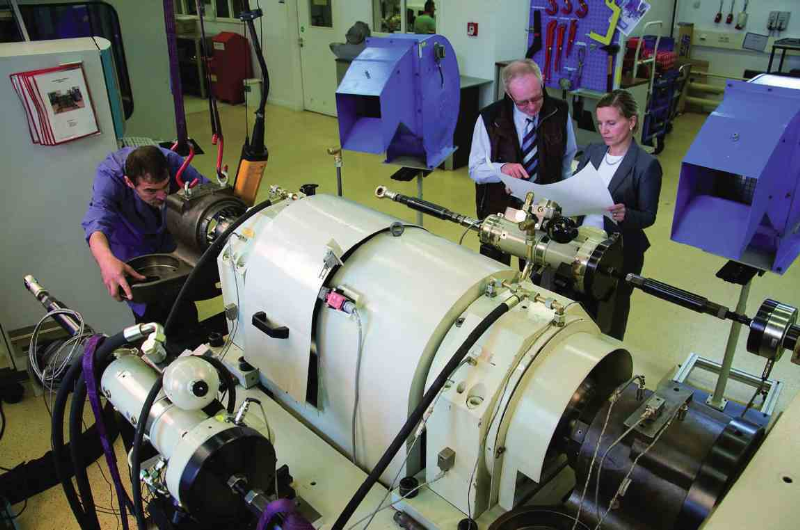 Schaeffler Group Industrial’s rail test facility in Schweinfurt, Germany is now available for UK customers to use in order to accurately assess the performance of axlebox (wheelset) bearings for rail applications

The special Schaeffler axlebox bearing test rigs are able to simulate travel speeds of up to 500km/h. All test rigs at Schweinfurt enable independent testing in accordance with the requirements of the latest European Standard DIN EN 12082. The functional tests carried out in accordance with this standard are used as verification of the suitability of axlebox bearings for real operational conditions.

The AN55 bearing test rig at Schweinfurt, for example, is primarily used to test double-row tapered and cylindrical roller bearings in their original housings. This system provides data on bearing behaviour under constant radial load and varying axial loads, as well as data on operating temperatures and grease operating life.

Axlebox housings and bearings are air-cooled, which has a considerable influence on grease operating life. The test rig is therefore equipped with an air stream simulation facility, which is able to generate wind speeds of up to 10m/s.

On another test rig at Schweinfurt, axlebox bearings and their original housings undergo leak-tightness water spray tests. During these tests, axlebox bearings mounted in their housings are sprayed continuously with water, both in their stationary position and under simulated operating conditions. During these tests, no water must penetrate the sealed spaces of the bearings.

The rail test facility in Schweinfurt is now one of only two test labs outside of Russia that are authorised to conduct independent tests on rolling bearings used as a method of transport for the Russian Federation. Under Russian Law, these test labs must be certified. The relevant certification tests can only be carried out by accredited test centres in accordance with application requirements.

In order to obtain the accreditation, Schaeffler Group’s railway sector management and corporate engineering worked closely with representatives from the Russian Federation over a two-year period. Following successful accreditation, the first certification tests on FAG TAROL bearings for the Siemens ‘DESIRO RUS’ project have now commenced. Initial operation for these bearings is planned for the start of the 2014 Winter Olympics in Sotchi. In addition, FAG cylindrical roller bearings are being certified for 200 dual-voltage type EP20 locomotives, which are also destined for the Russian market.

Schaeffler, with its INA and FAG brands, is a leading manufacturer of rolling and plain bearings. The Group boasts more than 100 years’ experience in the rail industry, with applications including axlebox bearings and housings; bearings and components for traction motors and gearboxes; railcar connectors; tilting technology; and bearings for train doors.