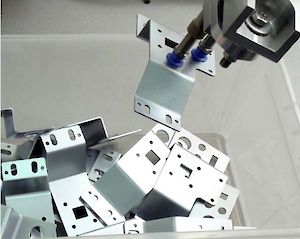 Vision guided robots are particularly suitable for the automation of pick & place tasks in bin picking applications. Bin picking is used in a wide variety of industrial sectors such as automotive, logistics, pharmaceutical, food, metallurgical, packaging or plastics. With such a diverse range of potential applications, providing a correctly configured solution is of paramount importance.  To address this, inPicker software from Infaimon, part of the STEMMER IMAGING Group, is available to allow robot integrators deliver the required solution. Choosing the most appropriate 3D imaging technique for the application is a critical requirement and inPicker is the only bin picking solution that connects to any 3D camera system. STEMMER IMAGING’s extensive experience in 3D camera technology means that inPicker can be supplied with any of five different technologies; passive and active stereo, laser triangulation, structured light and time of flight, while other bin picking solutions offer only one or two camera options. STEMMER IMAGING will determine the best imaging technique in the systems design phase and specify the right camera meaning that 100% of applications can be addressed with the inPicker platform. In addition, full software support is supplied directly from the STEMMER IMAGING Group rather than through 3rd party distributors.

Bin picking allows the selection and extraction of randomly piled pieces in a container. The inPicker fully automated bin picking system features the appropriate 3D camera system mounted on the robot head for object location with the robot carrying out the extraction and subsequent relocation of the pieces.  It operates in six phases:

Infaimon inPicker software is an innovative bin picking solution designed to help increase productivity by managing the complete picking approach including collision avoidance a so the robot path and grasp approach are automatically optimised. CAD models for the pick object, the container and the gripper are loaded into the system and the software manages the rest. When objects are piled up randomly, some parts can be stuck, overlapped or hooked together, which hinders the inspection process. By making use of the CAD models, inPicker can accommodate items with very irregular shapes and multiple structures. In addition, it works with textured components such as boxes of any type of product, or metal and plastic parts, allowing depalletizing of ordered or random objects. It can interface directly with a variety of robots including collaborative robots. The software utilises a 3D image analysis system for the recognition and determination of the position of the objects piled in a container.  Once the parts have been recognised and measured in 3D, the system selects the most suitable piece for picking, determines its position in a three-dimensional space and sets the coordinates to guide the robot arm to grip the chosen object with a precise orientation to allow its extraction. In conventional bin picking systems, the robot movements are determined dynamically, so it is a complex process to ensure that the robot will be able to reach the grasping position without hitting anything else. However by making use of the CAD models, inPicker simplifies this process by automatically identifying the position and orientation of the parts in the containers and allowing the selection of a collision prevention strategy by discarding those grasping positions that may pose a risk in the robot’s trajectory. In addition, inPicker is able to calculate the variable distance to objects as the container is emptied and objects keep getting further away. For a conventional vision system this involves problems of focus, scale, deformation by perspective, reflections and other issues.

In addition to its technological innovations, inPicker offers a number of automation advantages that directly result in an increase in industrial productivity:

All of these factors mean that the deployment of an inPicker bin picking solutions offers a short return on investment time.

From simple to complex