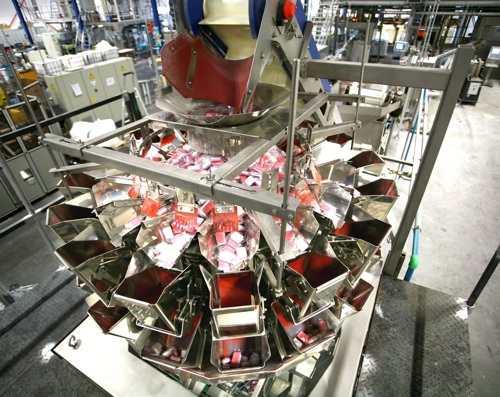 A 16 head, dual discharge Ishida CCW-R weigher designed for high speed packing lines has replaced counting machines for the packing of dishwasher tablets at German manufacturer Thurn Produkte, in Westphalia, taking packing speeds up to 2,000 tablets per minute, an increase of over 53%.

The dishwasher tablets are formed from powder in hydraulic presses, the tablets are individually flow wrapped before being packed into cardboard boxes. With demand for these and similar products increasing (Thurn also make many other items, including toilet cleaner tablets), new, faster tablet presses were installed. However, it soon became clear that, at 1,300 tablets per minute, the top speed of the counting and packing machinery used had now become a limiting factor.

Thurn were experiencing frequent downtime owing to problems with the counting machines. The timing of valves and cylinders in such equipment is critical, while fault location can be a time consuming and expensive job. In addition, staff were finding the machines stressful to operate.

The Ishida CCW-R has the ability to assess more combinations and then to choose amongst them more rapidly and reliably. The model at Thurn features a dual discharge arrangement, which allows the product to be channelled into two packs at a time, via a partitioned dipping funnel. To prevent the brittle tablets from damage during high speed weighing, its contact parts are cushioned with rubber inserts at appropriate points.

In addition, the weigher not only accurately allots tablets to packs by weight, but also checks the number of tablets per pack, using sophisticated count software. 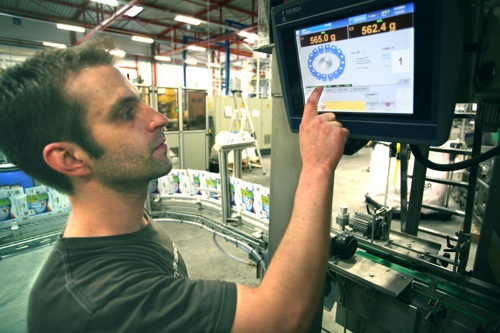 With the advent of the new multi-head, packing is no longer the rate limiting step. As production manager Axel Wild puts it, “Actually, we are still operating the multihead with the handbrake on. If we fed the output of several presses to the weigher, we could run the system at 2,800 tablets per minute.”

With its clear, intuitive touchscreen interface, its easily programmed product presets to make changeovers simpler and its easy to clean body, with contact parts removable and replaceable by hand, the new Ishida weigher is well liked by staff.

The famous circular structure of the multihead weigher is in itself a classic space saving design. Combined with the removal of the extremely bulky counting/packing systems, it has brought a much more spacious feel to the factory.

Keeping production moving much more satisfactorily has been a major benefit of switching from mechanical counting to multi-head weighing.

“We have yet to experience our first incident or downtime”, commented Axel Wild.

“The output on the packing line has increased by 50% and the elimination of down-time is playing its part in getting the expected payback for our investment”, said general manager Karina Tuttlies.