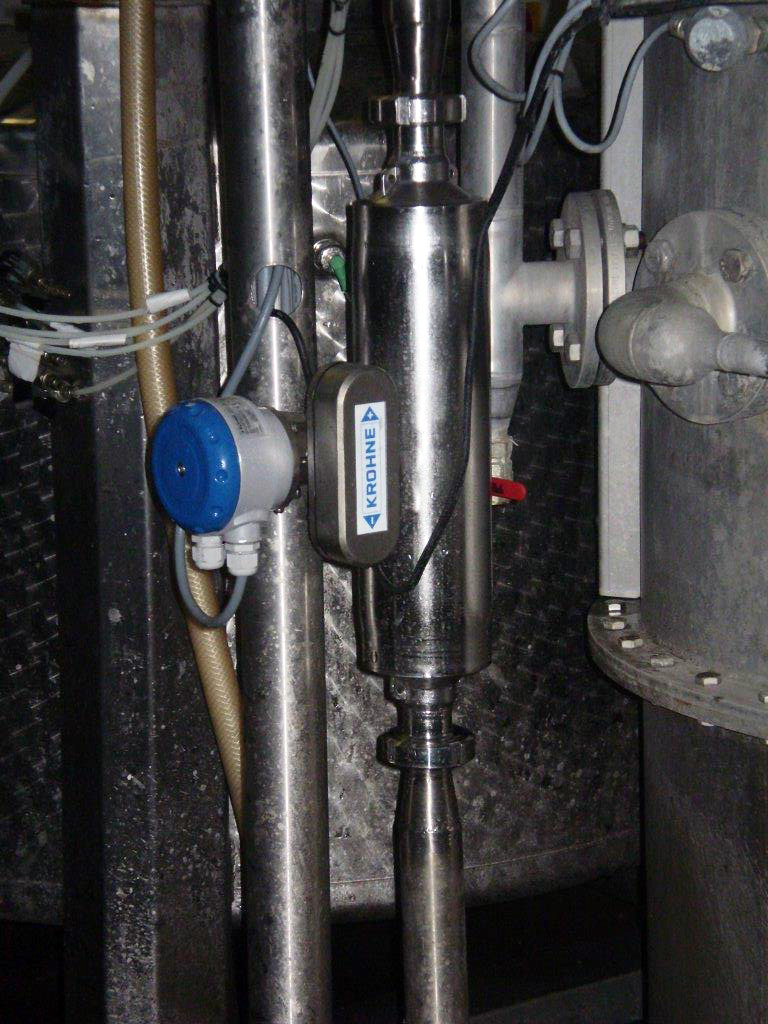 When thinking of alcoholic products that are produced in the UK, a fine malt Whiskey may spring to mind or perhaps beer brewed in one of the numerous breweries that can be found dotted around the country. How many people however, would immediately think of Vodka? Well, nestled in the Herefordshire countryside, the family run Chase distillery thinks a lot about Vodka, in fact it produces the award winning Chase Vodka which is the World’s first super premium English potato Vodka.

The entire process from seed to bottle takes place on the Chase estate ensuring that a close eye can be kept on all stages from growing the potatoes to distilling and bottling. It was at the distilling stage that Chase was looking for a flowmeter that was capable of measuring the flow rate of fermented potato mash. After careful consideration, they decided on KROHNE’s OPTIMASS 1300 Coriolis mass flowmeter.

The fermentation process is started with the mashing of potatoes and the addition of a brewer’s yeast. After about a week, the fermented potato mash is distilled four times in a bespoke copper batch pot and then twice more in a rectification column. It is here that the OPTIMASS 1300 is installed in a vertical pipe run feeding the distillation column. The density of the medium going through the meter can vary from 0.95 to 1.1kg/litre and flows at a rate of 2000 l/hr with pressure of 1BarG at a temperature of 30°C.

With the available space being limited, Chase required a meter that had a small installation envelope, but could still measure accurately and was capable of being CIP cleaned at 65°C. The OPTIMASS 1300 has a dual straight tube design which makes it ideal for use in hygienic applications as there are no crevices or bends for bacteria to gather and the meter can be easily drained and cleaned. Due to the hygienic nature of the application the OPTIMASS 1300 was supplied with hygienic fittings and also has all of the necessary hygienic industry approvals.

Prior to installing the OPTIMASS 1300, Chase used a manual method to monitor the flow of fermented potato mash into the distillation column, however they were looking for a mass flow meter to automate the process. The OPTIMASS 1300 has enabled Chase to monitor the feedstock to finished product ratio accurately and since installation it has also reduced production time by highlighting an underperforming feed pump that was increasing the mash charging time which in turn lengthened the production time.

Tim Nolan, engineering manager at Chase is very pleased with the performance of the OPTIMASS 1300, “Installing the KROHNE meter has meant that we can automate the process and ultimately reduce production time.  It also allows us increased flexibility as we can install the meter on other parts of the process to verify efficiency,” he continued, “KROHNE have supplied us with a meter that complies to our hygienic requirements and has proved to be very reliable.”

Initially, the OPTIMASS 1300 will be used with a local display, however in the future it is planned to interface the meter with the PLC using mA outputs to measure volumetric flow, density and temperature.

Design and function in harmony