Ovako first in the world to heat steel using hydrogen

Together with Linde Gas AB, Ovako has conducted a full-scale trial using hydrogen to heat steel before rolling. The trial was performed with good results in one of the company’s pit furnaces at the Hofors rolling mill in Sweden. This historic development for the steel industry proves that carbon dioxide emissions from rolling can be eliminated provided the right financial support and infrastructure are in place. 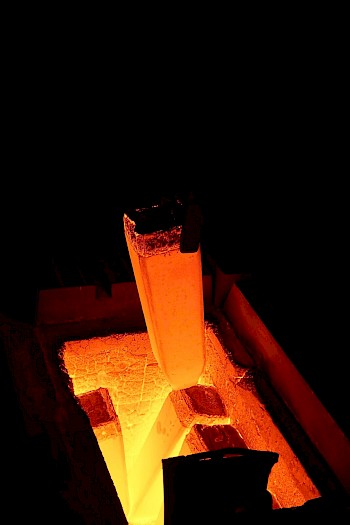 As part of its sustainability efforts, Ovako has worked for a long time to modernize and improve the efficiency of its furnaces. Thanks to this prioritization and the investments made in recent years, including upgraded control and automation systems, Ovako is now ready to take the next step. The use of hydrogen in combustion would have a great positive effect on the environment since the only emission generated is water vapor.

In collaboration with its partner Linde Gas AB, Ovako conducted a trial in which steel was heated using hydrogen instead of LPG (liquefied petroleum gas) before rolling at the mill in Hofors. The trial was successful and testing of the steel produced showed that heating with hydrogen does not affect the quality. Given the right conditions, Ovako could therefore introduce hydrogen heating for furnaces at all its rolling mills and thereby drastically reduce its already world-leading low carbon footprint from cradle to gate.

“This is a major development for the steel industry. It is the first time that hydrogen has been used to heat steel in an existing production environment. Thanks to the trial, we know that hydrogen can be used simply and flexibly, with no impact on steel quality, which would mean a very large reduction in the carbon footprint. We have worked closely with Linde for many years and are proud to be doing this together,” says Göran Nyström, EVP Group Marketing & Technology.

Ovako has been conducting sustainability work for many years and already has an 80 percent lower carbon footprint compared to the global average, but is constantly working to get even better.

“We have been working on furnace modernization for a long time, to make our furnaces as productive and energy efficient as possible. It is very exciting that we now have proof that it is possible to use hydrogen in heating without affecting the quality of the steel. If we can make this investment, it would have a great positive impact on the environment. Our estimate is that an initial investment would save 20,000 tonnes of carbon dioxide each year, and that is just the beginning. We performed this trial in such a way that it can be reproduced at full scale in Hofors and at our other rolling mills,” says Anders Lugnet, Group Technical Specialist, Energy & Furnace Technology at Ovako.