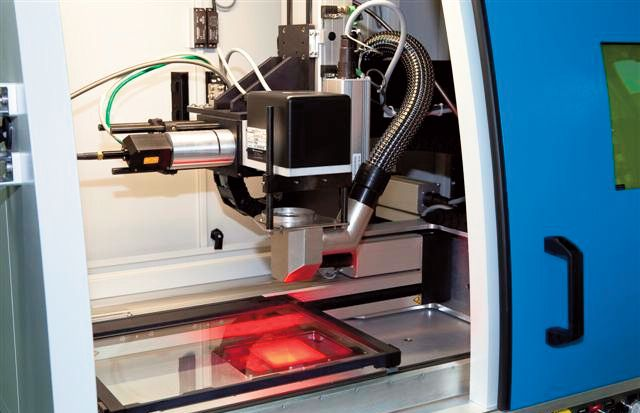 For more than 30 years, Laser Cheval has been a pioneer in the design and production of laser micromachining equipment, producing machines for laser marking, welding, cutting and drilling, as well as custom devices. The company is now using vision technology from Cognex to achieve an automated engraving solution

One of the latest designs from Laser Cheval laser engraves logos onto watch components with extremely small dimensions (e.g., watch crowns measuring 5 to 8mm in diameter), while maintaining positioning tolerances of less than 50 microns. The machine processes up to 1,200 workpieces per batch over a 20 hour period.

Formerly, each workpiece was manually and precisely positioned under the laser head, one by one. The logos were then engraved on the workpieces. Finally, each piece was visually inspected for engraving quality by an operator who had to be present constantly to carry out these tasks.

Building on the successful integration of Cognex vision systems for several existing products, Laser Cheval decided to automate the engraving process on this new machine. There were numerous constraints that had to be met: The automatic vision-based positioning system had to match the  tolerances obtained with the old manual system (under 50 microns).

Workpiece positioning had to be easy, with no pre-positioning required. The system had to be able to run without operator intervention for at least 20 hours (the time required to process its capacity of 1,200 workpieces). The need for additional quality checks had to be kept to a strict minimum.

The vision-based system had to have the same cycle time as the old system (processing a workpiece every 60 seconds). Laser Cheval wanted the machine’s users to be able to easily and single-handedly modify the job configuration (as a function of the workpiece type).

After research and consultation with various suppliers, Laser Cheval turned once again to Cognex. Given the combined constraints of the application, Laser Cheval rapidly adopted a solution based on a VisionPro-equipped PC.

“VisionPro vision software tools provide the richness, diversity and power that our application needs,” explains Michel Bertin, IT development director at Laser Cheval. “The Cognex PatMax part and feature location technology, geometry tools and calibration functions, among others, bring us significant advantages.” These calibration issues, in particular, led Laser Cheval to choose a PC-based solution, the only one powerful enough to handle the algorithms they wanted to implement.

“VisionPro proved to be the best choice in terms of vision tool performance; flexibility, with programs based on a rich, comprehensive object library; integration with our development tools; and quality and range of integrated graphics components. None of the competitors could beat this combination of advantages,” says Bertin.

Laser Cheval’s logo engraver is equipped with motor-driven axes. Controlled by a Cognex vision system, these axes precisely position each one of the 1,200 workpieces, loading up to 12 at a time in any sequence.

VisionPro automatically locates each workpiece, regardless of its position on the work table. It then communicates the precise coordinates of the workpiece (x, y and ?in the laser’s coordinates) to the axis control system, which moves the workpiece under the laser engraving head with a positioning precision far superior to tolerances obtained manually.

Confusion and lack of resources may prevent firms from implementing M2M