Robotics set to be a key driver in Chinese machinery market 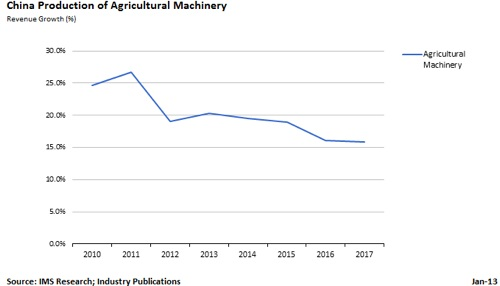 Production of agricultural machinery and industrial robotics in China is projected to expand at a strong rate in the coming years with average yearly growth of 18.1% and 18.8% respectively-making these areas the two fastest growing segments in the Chinese machinery business.

The robust performance of both the agricultural and robotics segments comes in stark contrast to most other areas of the machinery business, which are struggling with a downturn and overcapacity, according to the new report entitled, ‘The Machinery Production Yearbook – China – 2013’ from IMS Research, now part of IHS.

“The increasing price of agricultural products, rising consumption of food, surging labor costs and expanding government subsidies are the main drivers for growth in the production of agricultural machinery in China,” said Jay Tang, automation market research analyst at IHS. “Meanwhile, amid a continuing expansion in car manufacturing and a widespread push for automation, China has become the fastest growing market for robots in the world, spurring a rapid increase in domestic production.”

Since the end of 2011, because of weak export demand and a shortage of investment, China’s machinery production seems to have lost some momentum. Although some signs of recovery began to surface at the end of 2012, the Purchasing Managers’ Index, released by the National Bureau of Statistics of China, fell to 50.6 in April, down from 50.9 in March, indicating that economic recovery was not expanding.

While the PMI disappointed most machine builders, some companies, such as those that make agricultural machinery or industrial robotics, remain optimistic about the prospects for future growth.

Agricultural Machinery
As the key element to enable urbanisation in China, the Chinese government is paying much more attention toward mechanising agriculture by introducing more agricultural machinery. According to the 12th Five-Year Plan and the government’s stated objectives, agricultural mechanisation should rise from 52% in 2012 to 60% in 2015, then to 70% in 2020 and to 82% in 2030.

Benefiting from the Chinese government’s incentive policies and purchase subsidies, the production of agricultural machinery in China was estimated to be worth $57.9bn in 2012, 19.1% higher than in 2011.

IHS forecasts that production of agricultural machinery will continue to grow quickly from 2013 to 2017 at a compound annual growth rate (CAGR) of 18.1%, faster than the average for all Chinese machinery production. 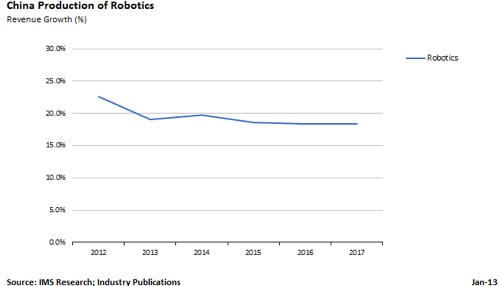 Industrial Robotics
The production of robotic machinery last year in China was estimated to be worth $589m, up 22.6% from 2011.

One factor driving the expansion of robotic machinery is the growing automobile market. Here manufacturers are being forced to automate out of a need to side-step rising wages in China, along with expanding demand for higher quality Chinese products in both domestic and export markets.

Also driving the industrial robotics market are factors related to China being one of the most rapidly growing consumer markets in the world, including an emerging middle class demanding higher quality consumer goods, better medical care, and a more comfortable lifestyle.

Other factors encouraging the growth of robotic machinery are climbing labor costs in the country along with decreasing labor supply, the viability of mechanical alternatives, and the government’s efforts on industrial upgrades.

IHS forecasts that the industrial robotics production sector will grow faster than those of other industries from 2013 to 2017, at a CAGR of 18.8%. Worth mentioning is that critical components, such as precision gearboxes, servo systems and controllers, rely heavily on international suppliers.