The peanut butter and jelly of industry: Legacy equipment can work hand in hand with emerging technology

New technologies relating to artificial intelligence, robotics, augmented reality and 3D printing are emerging rapidly. Manufacturers are faced with an alarming number of options, all promising to help them move closer to a smart, Industry 4.0 equipped factory. The ultimate dream for many manufacturers is full digitisation, both vertically and horizontally. That is, connecting all functions across a company as well as its suppliers and distributors in the supply chain. There are leading businesses, such as Siemens, who are already beginning to track and monitor their production in truly smart factories.

For smaller manufacturing businesses, closing the gap between emerging technology and their existing equipment is a challenge many are faced with. We are still at an early stage in the fourth industrial revolution and many companies lack both the staff and the technological infrastructure required to fully transform their operations. Digitalisation often requires substantial change in an organisation’s culture and technology. However, this change in technology does not have to be a complete overhaul or a sparkly new factory.

Industrial equipment is built to last, which means that manufacturers are often operating machines that are 20 to 30 years old. Many manufacturers are therefore operating legacy drives, sensors, programmable logic controllers and other automation equipment. This equipment often forms the fundamental backbone of operations and is vital to business success.

If the legacy equipment is running well and causing no problems, you may think, what’s the issue? The difficulty comes when manufacturers want to update their equipment so that it communicates with other machines. Equipment built 20 years ago was not built to communicate and can therefore hold back manufacturers’ Industry 4.0 aspirations. For example, the equipment may communicate via proprietary protocols that use RS-232/422/485 serial cables, which while fit for purpose, are not suited to remote monitoring across a TCP/IP network.

Any new equipment, which will be built to last until 2050, must operate happily alongside machines introduced in the 1980s. Generally, newer machines will come equipped with means to communicate with the Industrial Internet of Things (IIoT), but because the backbone of the factory doesn’t, manufacturers need to create an ecosystem where emerging technology and legacy machines can work in perfect harmony. 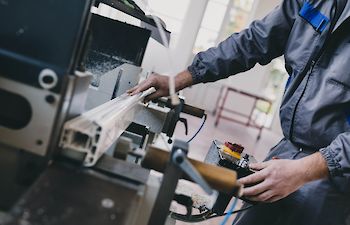 The first approach for manufacturers trying to align emerging technology with legacy equipment is rip and replace. That is, deciding that like electricity and water, the two just simply don’t go together and the best option is to start from scratch and commission an entirely new system.

While the idea of a brand-new Industry 4.0 ready factory might sound attractive, there is one obvious barrier — cost. While the benefits of perfect interoperability, high efficiency and synchronisation with augmented reality and other emerging technologies are certainly a pull, it is expensive to design and build a new line. When you consider the time taken to source the equipment, uninstall your legacy equipment, install the new machines and re-train employees, the cost spirals further.

The other approach is to wrap and extend, also known as retrofit, incorporating IIoT connectivity devices, such as OPC servers, IoT platforms and IoT Gateways to add additional capabilities to the legacy machine. These devices will make communication between legacy and current protocols easy. Retrofitting can also mean adding sensors to measure vibration, temperature or other parameters that indicate how equipment is performing and communicating the information via the IoT. Using protocol converters to ensure equipment from different vendors can speak the same language means data collection and analysis can be pooled with that of emerging technologies.

While these simple steps might not meet visions of tapping into every piece of equipment from your smartphone, it does provide a viable starting point to access, monitor and control information remotely. It’s catching on – The Technology Group at HIS Markit Ltd estimates that the number of connected IoT devices worldwide will increase from nearly 27 billion in 2017 to 125 billion in 2030, much of which will be legacy equipment.

Connecting equipment in this way can be done at a flexible cost and over whatever timespan the manufacturer is comfortable with. IoT connected sensors are an inexpensive way to equip legacy equipment with the benefits of connectivity.

The best approach for manufacturers is to create a roadmap of their current digital maturity and where they aim to be, setting targets and prioritising the actions that will bring the most business value. It may be necessary to upgrade some equipment, but this is a far sight from scrapping the entire factory and starting again. By adding IoT connectivity to legacy equipment, manufacturers can relax in the knowledge that it can communicate with new technology.

Legacy equipment and emerging technology are not like electricity and water, orange juice and toothpaste or Mentos and Coca Cola. In fact, they are more like peanut butter and jelly — you don’t expect them to go well together, but they really do.

For more information on upgrading your automation system, visit www.euautomation.com.