The Yokogawa WT5000 Precision Power Analyzer is being used by Solar Team Twente, to maximise their chances of winning the ultimate challenge for solar powered race cars, the biennial Bridgestone World Solar Challenge. 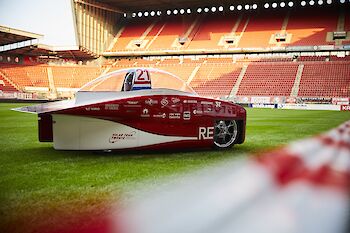 Having first taken part in 2005 and finishing 9th as the highest placed new entrant, this young team, comprising of aerodynamic, electrical, mechanical and structural engineers from the University of Twente and the Saxion University of Applied Sciences in the Netherland, were determined to win the 3000 km race from Darwin in the north of Australia to Adelaide in 2019.

To be able to win the World Solar Challenge, a race car must generate as much solar energy as possible and convert the electricity it generates as efficiently as possible into mechanical power delivered to the wheels. At the same time, it must keep energy losses to a minimum: race teams pay minute attention to aerodynamic design to keep wind resistance to a minimum. In the case of RED E, the name given to Solar Team Twente’s race car, total wind resistance is the equivalent of a conventional car’s wing mirror. The driver must then race as fast as possible but not so fast that the car’s battery runs out of power when it is not in bright sunlight.

There are four important electrical systems in a solar race car, the array of solar panels, the battery and its management system, the inverter (motor drive), which converts the solar panels’ direct current output to a three-phase alternating current supplied to the motor, and the motor itself. The team was aiming for better than 99% efficiency for the electrical power conversion circuits.

“We were looking for that extra 1% efficiency to give us an edge over other race cars.” says Rob Kräwinkel, team electrical engineer, “When you are already at better than 95% efficiency, eliminating any remaining losses is really hard to do. You have to be able to look at a detailed level at tiny deviations in voltage or current. That means you need a really accurate and sensitive power measurement system.”

To achieve the accuracy and precision required, the team chose the Yokogawa WT5000 for two crucial tasks. Firstly, to validate the accuracy of the ‘fuel gauge’, the car’s on-board sensor measuring the battery’s state of charge. This system measures current flowing into the battery (from the solar panels) and flowing out of the battery (to the motor). By subtracting output from input, it can calculate the residual charge in the battery. This required extremely accurate continuous measurement of current flows. Secondly, to measure the power output of the motor system, including the inverter and the motor itself, at a range of power input values, to enable the team to refine the design and incrementally improve its efficiency. This called for extremely accurate power analysis at a high sampling frequency.

Rob confesses, “With the WT5000, we also discovered that that the current sensors in the fuel-gauge circuit had an offset, which were making the car’s state-of-charge measurements inherently inaccurate. By compensating for the offset, we could confidently provide the driver with a vital extra 1 or 2 km of range from the battery at a given speed.”

The modular and extensible WT5000 is the world’s most accurate precision power analyzer with a specified measurement accuracy of ±0.03%. Measurement bandwidth is 10MHz for voltage and 5MHz for current, and the maximum sampling rate of 10Msamples/s exceeds the data refresh rate required to validate RED E’s fuel gauge system. With the very best isolation, noise immunity and advanced filtering capabilities, WT5000 users can make simultaneous measurements on up to seven inputs, and view them on its high-resolution 10.1” touchscreen.

“The WT5000 is a very nice instrument to use, it’s intuitive, and it’s easy to find your way around the controls.” states Rob, “It’s also easy to tweak the display so that it shows exactly the measurement outputs you are interested in, like when it clearly demonstrated that our new inverter design outperformed the equivalent off-the-shelf model by a significant margin.”

Alas, the team must now wait until 2021 to see the culmination of their dream. With over half the race completed in 2019, RED E was in the lead and on course to win, with an average speed of 89.7 km/h, when mother nature intervened. The car was irreparably damaged when a very strong crosswind gust forced the car off the road and down a slope, where it rolled over. The winners’ trophy therefore had to be handed to the Belgian team, Agoria, who achieved an average (and slower) speed of 86.6 km/h.