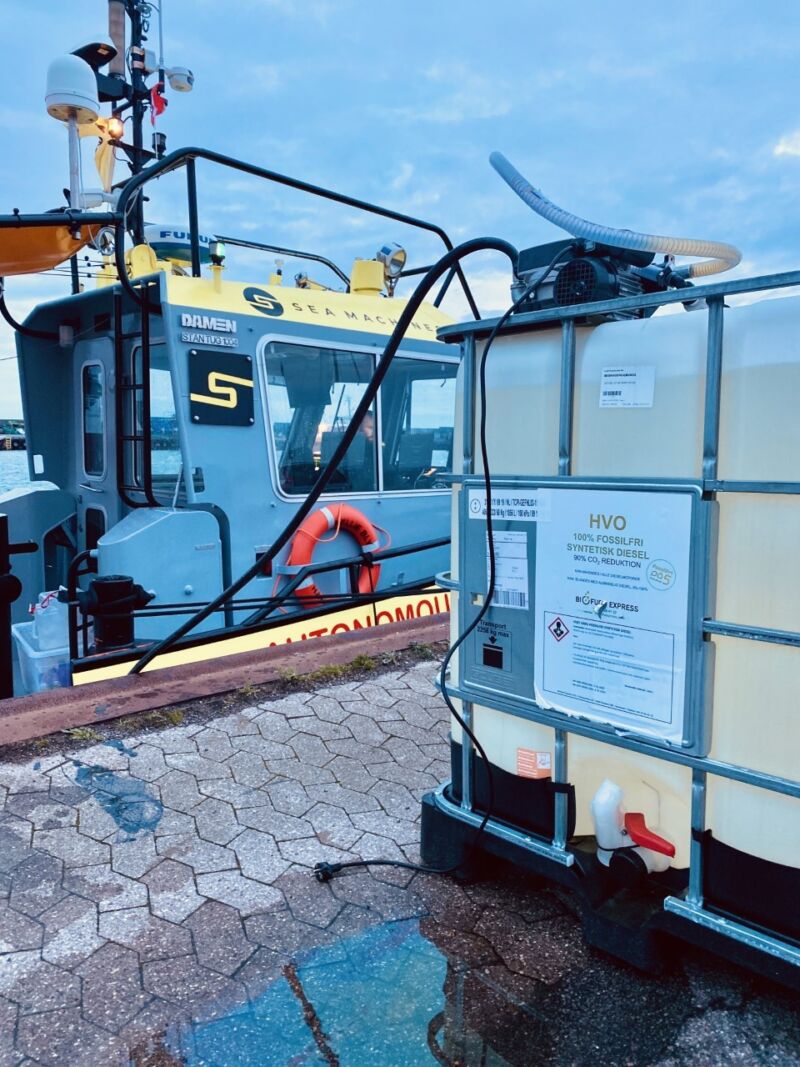 To reduce the number of harmful emissions produced as it achieves the world record for the longest autonomous mission at sea, Sea Machines Robotics, a leading developer of autonomous command and advanced perception systems, is utilizing renewable Hydrotreated Vegetable Oil (HVO) biofuel, sourced by Bunker One in Denmark, to power its autonomous Nellie Bly tugboat. Operating under the project name The Machine Odyssey, this vessel is approaching the final leg of its 1,020 NM total mission, which began in Germany and made stops in Denmark before starting the return loop.

Sea Machines refueled Nellie Bly with cleaner, fossil-free biofuel in Klintholm, Hundested, Skagen and Fredericia, Denmark. By the time the vessel reaches its final destination in Hamburg, Nellie Bly will have used approximately 4,000 litres of biofuel, accounting for around 70 percent of the fuel used for the trip. Using HVO biofuel reduces harmful emissions by 90 percent.

“Sea Machines is committed to responsible business. Whenever possible, we strive to fulfill our mission of advancing our industries with modern autonomous technology, while also limiting our impact on the natural environment,” said Sea Machines’ CEO Michael G. Johnson. “From sourcing green fuels to planting trees that to offset our annual carbon footprint, and other environmental-focused company activities, we are proud to claim a carbon-neutral status since 2018. We appreciate the logistics required on behalf of Bunker One to ensure we had access to biofuel in Denmark, and we look forward to continuing to prove that our waterways are primed and ready for marine autonomy – especially for long-voyage missions at sea.”

“Being part of such a momentous undertaking, as the first fully autonomous ship’s voyage around Denmark is truly inspiring. And being able to provide the green fuel needed for the project to not only make this frog-leap forward in safer shipping technology and manoeuvring but also ensuring a much more CO2-efficient trip is something we’re very proud of at Bunker One, as we see ourselves as supporting the pioneering spirits with renewable fuel,” said CEO Peter Zachariassen, Bunker One.

Though Sea Machines’ autonomous Nellie Bly is currently operating in Europe, a team of U.S. Coast Guard-licensed officers is commanding operations from the company’s control room in Boston – a station located more than 3,600 miles away. Throughout the mission, viewers have had the chance to watch the journey live from The Machine Odyssey’s dashboard, which streams video and vessel data 24/7 directly from the boat.

Energy from Waste sector gets ready for expansion and development