Universal Robots racks up the benefits at Etalex 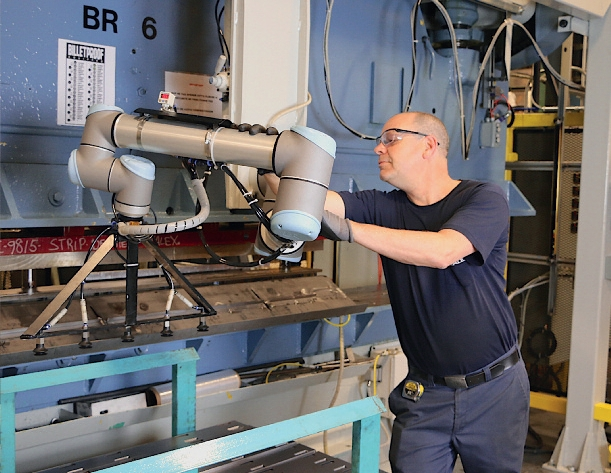 Installing a Universal Robot to pick metal parts out of a press brake solved several automation headaches at Etalex. The Canadian manufacturer of shelving systems had no room for safety guarding in front of the press and needed a flexible user-friendly robot able to safely handle the pick and place tasks in a high traffic area. The UR10 robot was up for the challenge.

When entering the vast 300,000 square foot production hall at Etalex, your first encounter is Universal Robots’ UR10 diligently unloading metal parts of various shapes and sizes into a large press brake. Compared to the other 25 robots in operation at Etalex, all placed behind sturdy safety fencing, the Universal Robots application is an unusual sight. The UR robot belongs to a new breed of robots dubbed ‘collaborative robots’ as the built-in force control limits the force at contact and does not cause bodily harm, enabling them to work right alongside employees. Unlike more traditional industrial robots that normally stay bolted down in one spot, the lightweight UR robots can also quickly be moved and reprogrammed.

FREES UP 7 MAN HOURS PER DAY

Plant Engineer at Etalex, Jean-Francois Rousseau, was eager to try out this new type of robot: “We needed a flexible automation solution that could be used for 10 different production cycles. Since I only have six feet of space in front of the brake press, it was important that I could run this application without safety caging around it.”

Before the arrival of Etalex’s new robot colleague, an employee would manually unload the press brake eight hours a day. The manual tasks have now been reduced to an hour daily spent on inspecting the quality of each pallet and changing the coils, resulting in an estimated ROI of about 12 months.

Machine operator at Etalex, Richard Clive, stresses how the UR10 has made the workplace 100 per cent safer: “Before, you had to put your hands close to the brake press. There’s always a chance of an accident happening at any time. But with the Universal Robot, there is no chance of anyone getting injured.” Prior to installing the UR10, Etalex got the approval from the Commission de la santé et de la sécurité du travail du Québec (CSST) (Occupational Health and Safety Commission), which approved the use of collaborative robots at the factory.

Differentiating the UR robot from its caged peers is also the ease of use. Programming happens on an intuitive touch screen tablet where the user simply presses arrow keys to make the robot move to desired positions. Another option is to put the robot in ‘teach mode’.

The winners and losers of the 2019 job market